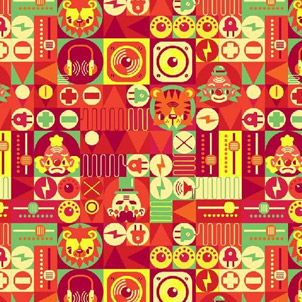 Born in Transylvania and currently based in Budapest, designers Amee Orbán and Csaba Gál are the brains behind Chobopop. In 2005, they set up a creative studio and began to design and produce felt toys. Their digitally designed, hand-sewn characters were showcased at Antwerp’s Fashion Museum in 2007 and at Myplasticheart Gallery in New York the following year. After their toy designs proved to be a hit the couple branched out into digital illustration; they now create colourful, geometric artworks.
Wanddecoratie